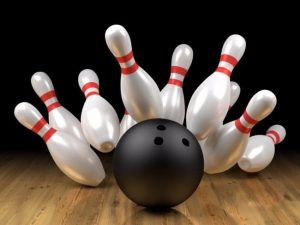 Understanding Scoring on the Overhead Monitors

Everyone is thankful for the electronic scoring at the bowling alley. We see our score come on the screen above us, but many of us don’t know how it is determined. Hopefully the following explanation will clear up this mystery.

The score board for a bowling game has TEN FRAMES.

During each frame, the player gets TWO TRIES to knock down all of the ten pins. The number knocked down is recorded:

You also should note that the score of a single frame is dependent upon the score of the frame before it. For example, the score in the second frame below is 13 because you must add the 5 pins from the first frame to the 8 from the second.

A game of bowling consists of ten frames, and the maximum you can score is 300 points.

Frames 1 to 9 are identical in their scoring, and then you come to the tenth and final frame. On the overhead monitor this looks different from the others, as it has an extra space. This is to allow the bonuses to be put in if the player scores a strike or a spare in this frame. If you get a strike with your first ball in the tenth frame, you are allowed two more balls. You could get three strikes in the tenth. You could get a spare in your first two balls; this then means you are allowed one extra ball to get the bonus points for your spare. Of course you may not knock all of the pins down with the first two balls and you get no further bonus goes and your game is finished.

You will notice lots of dots and arrows marking the floor, with dots on the approach and arrows on the lane. These are to help you position yourself as you bowl. Before you start, walk up to the black line, called the ‘Foul Line’, that marks the beginning of the lane.

martinakrobinson
Great place We came to bundoran for a few days with a 10 & 11 yr old. They loved it here. They won loads of tickets and could get what they really wanted. The staff where so friendly and helped when machines not working. Great place to keep the kids quiet for a while. We always come here when travelling to bundoran and donegal town. Kids love it.

loolabelle55
Great way to spend a rainey day. Have been going to macks 36yrs now...still holds fantastic memories! Now my daughter is following suit, she takes her 5yr old, since she was 7mths! Every opportunity of getting away for a few dys, we almost always choose Bundoran, an Macks. Never even been in the other arcades! Well, I walked in, around and straight out again! Everyone looking at you like you shouldn't be there! Macks has atmosphere! Also I find the staff very friendly, always ready to help if your machine breaks or you need anything.

Lisa orr
Lisaorr1098@gmail.com Good fun for family and children the staff are very welcome and friendly would recommend to anyone with their children
Tripadvisor rating score: 3.5 of 5, based on 49 reviews.

This website uses cookies to improve your experience while you navigate through the website. Out of these cookies, the cookies that are categorized as necessary are stored on your browser as they are essential for the working of basic functionalities of the website. We also use third-party cookies that help us analyze and understand how you use this website. These cookies will be stored in your browser only with your consent. You also have the option to opt-out of these cookies. But opting out of some of these cookies may have an effect on your browsing experience.
Necessary Always Enabled
Necessary cookies are absolutely essential for the website to function properly. This category only includes cookies that ensures basic functionalities and security features of the website. These cookies do not store any personal information.
Non-necessary
Any cookies that may not be particularly necessary for the website to function and is used specifically to collect user personal data via analytics, ads, other embedded contents are termed as non-necessary cookies. It is mandatory to procure user consent prior to running these cookies on your website.
SAVE & ACCEPT
Call to Book
Directions